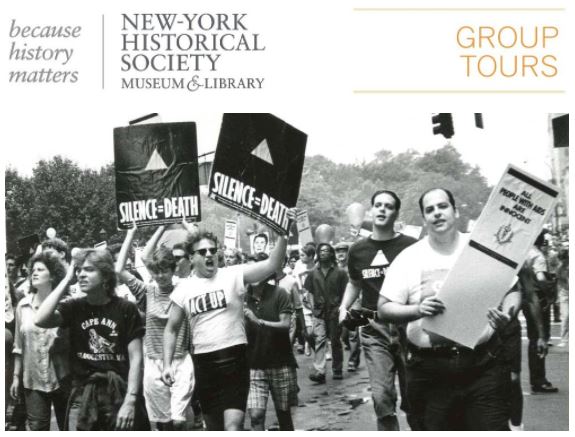 GAAMC is pleased to announce an outing into New York City to view 3 exhibitions of LGBT history, in a one-hour guided tour, followed by two short films.  The prices for this event are $26 for adults, $21 for seniors.

Enjoy a one-hour guided tour through three exhibitions hosted by the New York Historical Society, at the Museum of Natural History.

Letting Loose and Fighting Back: LGBTQ Nightlife Before and After Stonewall explores the history of LGBTQ bars, clubs, and nightlife in New York City during the second half of the 20th century. By the Force of Our Presence: Highlights from the Lesbian Herstory Archives examines lesbian lives pre- and post-Stonewall. A special installation, Say It Loud, Out and Proud: Fifty Years of Pride, features imagery from New York City Pride marches and other LGBTQ protests from the 1960s to the present day, as well as a timeline of milestones and objects from LGBTQ history.

After the tour, we can take in the 18-minute short film New York Story and the 17-minute short documentary We Rise.

New York Story, narrated by Liev Schreiber, is an eighteen-minute theatrical media experience. Set in a custom-designed, state-of-the-art theater off the Robert H. and Clarice Smith New York Gallery of American History, it illuminates the story of the nation by exploring the story of New York and its rise from a remote outpost to a city at the center of the world.

We Rise: A New Film from the Center for Women's History

On November 6, 1917, women in New York State gained the right to vote. Amidst the arduous 70-year fight for suffrage, activists also brought to light myriad social issues, from labor conditions to racism to birth control. Narrated by Meryl Streep and featuring the song "We Are Here" written and composed by Alicia Keys, "We Rise" places women at the center of political thought and action that reshaped the country in the early 20th century.

Through artistic projections, immersive sound, and theatrical lighting, the unique 17-minute film created by Donna Lawrence Productions profiles some of the remarkable women whose advocacy for change had lasting effects—including Lillian Wald, nurse and founder of Henry Street Settlement; Addie Hunton, suffragist and leader of black women's organizations; Margaret Sanger, birth control activist; and Clara Lemlich, who led the massive strike of shirtwaist workers in New York's garment industry in 1909; as well as women such as Clara Driscoll, head of Tiffany Studios' Women's Glass Cutting Department, who found new opportunities for work and independence in New York City during the era.

The absolute maximum number of guests who can take this tour with GAAMC is 25.  Our online store has been populated with tickets at both the Adult's price of $26 and the Senior's price of $21.  If you attempt to buy your ticket but receive a message that tickets are sold out, please email [email protected], to ask if there are spots available.  We may be able to adjust the adult/senior mix of tickets.

Transportation:  From GAAMC, the smartest way to travel is to take NJ Transit trains to Penn Station in New York City, then transfer to the C (Blue Line) subway train uptown to 81st Street.  Please plan to arrive at the NY Historical Society as close to 12:30 as possible.  Tickets will be distributed at the event.  Refunds for cancellations will not be available unless the tour is canceled by the New-York Historical Society.