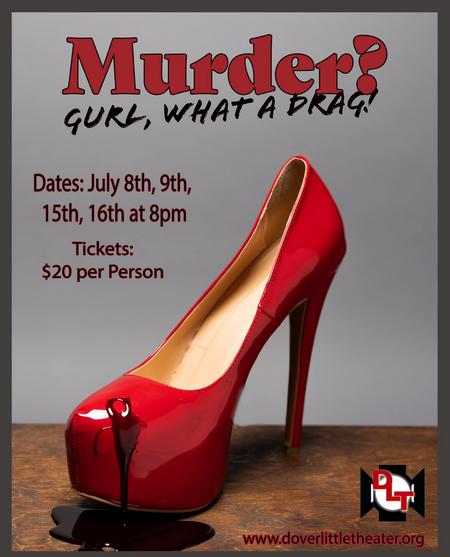 On Saturday, July 16, GAAMC will be visiting the Dover Little Theatre, on Elliott Street, in Dover, to see "Murder? Gurl, What a Drag!"  This little theater has a capacity of approximately 100, and seating is general admission, not reserved seats. That means you must order your tickets directly through the theater's website.  PRIOR to the show, those who wish to participate may also gather for dinner at a local eatery in Dover. Once arrangements have been made with that establishment, we will create a separate event on our site, so that you may RVSP for dinner.

Murder? Gurl, What a Drag! is a night of 15 inch pump heels, wigs galore and of course…murder! When a somewhat normal night at the fabulous Madam Beatrice’s Café is interrupted by the death of one of their performers, the queens of the cafe develop a plan to search for the perpetrator involved. Be prepared for a night full of laughter, heavy contour, and mystery. This production is intended for mature audiences due to language and subject matter.

“DLT always tries to assist artists with showcasing their craft. From a screening of a documentary about mental acceptance, to staged readings to help an author to visualize what is on paper. It is our mission to always be welcoming to all. In a constantly changing society, the need for support and acceptance could not be more of an urgency. We chose to premiere this production in July not only because it is close to pride month, but to send a message that PRIDE is a year round obligation. We hope all enjoy the show as much as we have in bringing this original script to life.”