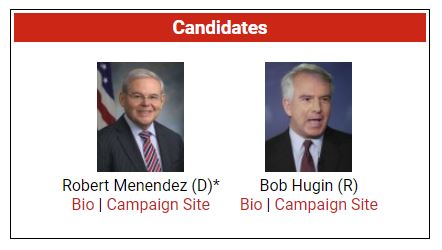 9/13/18 -- This race is surprisingly close, though perhaps not given Robert Menendez’s ethical troubles. Nevertheless, the last time Menendez looked as though he might be in trouble, the national environment ended up saving him. And the last time a New Jersey senator looked like he was in trouble, the state Supreme Court saved him. Menendez is still very much the favorite over Bob Hugin.

To the casual observer, New Jersey appears to be solidly Democratic. Yet this overlooks the nuances of state politics. With a handful of exceptions, New Jersey has actually voted within a few points of the national average in presidential elections over the past 100 years. However, its lean is Democratic -- and rather consistently so over the past few years. Republicans rarely get blown out of the water here, but neither do they typically eclipse the 50 percent mark.

That seems to be the scenario unfolding this cycle. Senator Bob Menendez is theoretically vulnerable, having survived a criminal trial after the jury failed to return a verdict. But Republicans haven’t found a candidate so far, and given the state’s leanings and the national environment, it seems unlikely that a real challenge to Menendez will surface.