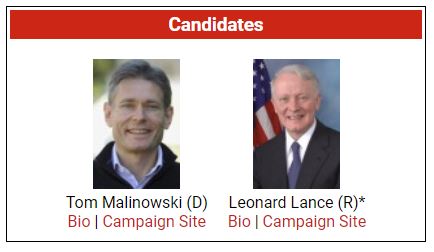 Two of the closest, most competitive Congressional races in the nation are for the opportunity to represent two neighboring Congressional districts in the garden state.

Republican Rep. Leonard Lance is struggling in his bid for re-election in a wealthy Central Jersey suburban district that is one of the nation's top congressional battlegrounds, a Monmouth University poll released Thursday said.

And President Donald Trump and the GOP tax law are weighing him down.

A five-term incumbent from Clinton Township, Lance trailed Democratic challenger Tom Malinowski of Rocky Hill 47 percent to 39 percent, with 12 percent undecided, among all potential voters, a group defined as those who voted since 2010 or registered since then, the poll found.