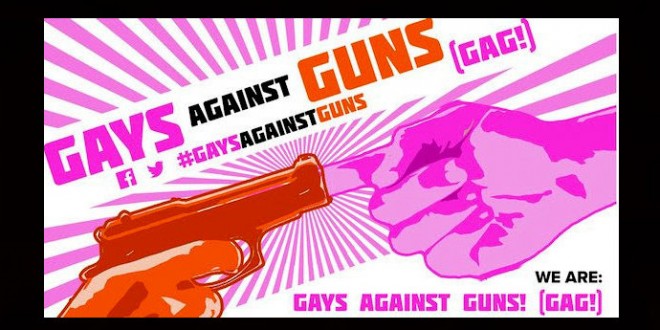 8:30pm: Gays Against Guns New Jersey
Join us for a discussion of gun violence prevention issues with Dwight Panozzo who is a member of the Steering Committee of Gays Against Guns New Jersey. In addition to co-founding GAGNJ, Dwight is a Board Member of Bergen Chapter Brady Campaign and the co-founder of BecauseLifeIsSacred.Org. You can get more information about the group and what they’ve been up to on their Facebook Page.

More about Gays Against Guns (from their website): Gays Against Guns is an inclusive group of LGBTQ people and their allies committed to nonviolently breaking the gun industry's chain of death--investors, manufacturers, the NRA and other lobby groups, and their puppets in Congress that block good gun laws.

We are New York-based but work with GAG chapters in other cities to ensure safety for all individuals, particularly vulnerable communities such as people of color, LGBTQ people, religious minorities, and their significant overlap.

We strongly believe that bigotry and hate plus easy access to lethal weapons is a deadly combination. We demand sensible and meaningful gun reform such as a ban on assault weapons and background checks on ALL gun sales, including online and at gun shows.
5 RSVPS